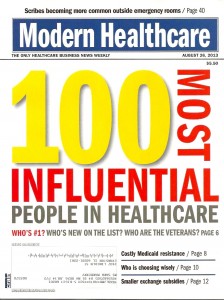 The list, which is compiled from reader votes weighted equally against the opinions of the magazine's senior editors, is a "who's who" in the healthcare industry.

They range from government officials and politicians (President Obama is #3 this year) to association leaders, hospital executives, pharmaceutical executives, foundation presidents, and others.

And whether they know it or not, many of them are also influencing the design of the physical environment of healthcare.

A few years ago, I convinced the editors of Healthcare Design to launch its own list of most influential people in healthcare design, which, like the Modern Healthcare list, included many of the same people every year.  This year, the editors revamped it a bit and introduced the HCD 10, which recognizes individuals and organizations in specific categories for the work they've done over the past year.

Thinking about these lists made me want to compile my own historical "10" list of individuals and organizations who did something that significantly influenced the healthcare design industry.  There are many who have contributed over time, but I tried to pick those whose ideas or actions caused a shift in thinking that impacted how healthcare facilities are designed.

Wrote about the physical environment's impact on patient outcomes in her Notes on Nursing in 1860.

U.S. senators that sponsored the 1946 Hospital Survey and Construction Act to provide federal grants and guaranteed loans to improve the physical plant of the nation's hospital system. The impact of this law is still felt today, and was the impetus for developing guidelines for the design and construction of healthcare facilities, now managed by the Facility Guidelines Institute, which was formed in 1998.

Considered by many as the "Father of Evidence-based Design," this former Texas A&M professor's research connecting views of nature to patient outcomes was published in the journal Science in 1982. Was also one of the founding board members of The Center for Health Design.

Yale University professors who developed the diagnosis-related group code system to determine how much Medicare pays the hospital for each service. Implemented in 1982, this changed the focus of keeping people in hospitals longer.

A healthcare architect who started the first conference on healthcare design, "The First Symposium on Health Care Interior Design" in 1988. This became the spawning ground for The Center for Health Design, which was founded by Ruga and colleagues in 1993.

Wrote Medical and Dental Space Planning (VNR, 1982),  the first book to thoroughly examine the practice of healthcare interior design. The long-time member of The Center for Health Design's board is currently working on a third revision of the book.

Published "To Err is Human" in 1999, outlining strategies for reducing preventable medical errors by 50%.  While it didn't really address the design of the physical environment, the report caused many in the design industry to focus on safety.

Signed Affordable Care Act in March 2010, which aims to provide affordable healthcare coverage for all Americans and create a wellness-based model of care. Healthcare organizations are having to re-think how and where they deliver care, which has big implications on facility design.

Enjoyed the list. You had me until number 10 . . . disagree that the ACA will have the positive impact hoped for . . . also, I feel like Kirk Hamilton would be a good addition to this list. He influenced a whole generation of medical planners/thinkers and still does.

Thanks for your comment, Greg. While most of those on the list did make a positive contribution to healthcare design, my criteria was those who have significantly influenced the design of healthcare facilities. Positive or not, the ACA is definitely changing the types of healthcare facilities we're designing now and into the future, and is the first major piece of legislation to do so since Hill-Burton.

Sara
Greg is right. Kirk belongs on any list.
So who to leave off?
I can't suggest anyone to omit from this list, other than myself, so make it the Historical list of 11 which would put Kirk slightly ahead of the IOM.

Maybe an even 12? Who else to add besides Kirk?