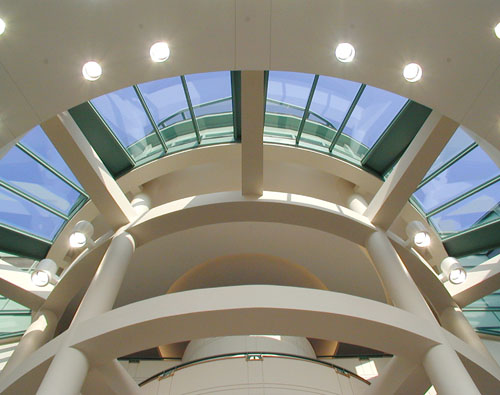 It was followed by this subhead: "The ACHA 2017 Legacy Project Award winner remains just as relevant as when it was first built."

Still being groundbreaking is one thing.  Remaining relevant is another.

When it opened in 2000, the design of Bronson Methodist Hospital in Kalamazoo, Mich., was groundbreaking because, among other things, it had:

It was designed with patients in mind (a relatively new concept at the time) and used strategies that produced positive outcomes. And while the evidence-based design (EBD) process was not defined nor widely understood in the 1990s when it was designed, Bronson Methodist Hospital became an EBD poster child.

For many years, it was the signature project in The Center for Health Design's Pebble Project, which brought healthcare organizations that were designing and building new facilities together to share and learn from one another and get introduced to the evidence-based design process. The ultimate goal was to generate more research linking the design of the physical environment to outcomes.

To say that Bronson is "still groundbreaking" may imply to some that no other truly groundbreaking hospitals have been designed since 2000.

And maybe we haven't.  But change-the-world innovation doesn't happen overnight. It took us 100 years to put wheels on our suitcases!

What has happened, though, is that many of Bronson's innovations have been taken to the next level.  As I recall, the design of some of its patient rooms is nothing to write home about.

Would we have seen an Army Medical Center like this one, let alone on the cover of Healthcare Design, in 2000? So, the healthcare and design industry has made progress.

That Bronson Methodist Hospital's design is still relevant after 17 years is a good thing. Especially since the expected lifespan of a hospital building is 30-40 years.

In the meantime, the healthcare and design industry should keep celebrating good design and challenging each other to push the envelope.

Love your information Sara. Aging as I am I'm hoping that if I need a stay in a hospital its one that is patient friendly.
Thank you