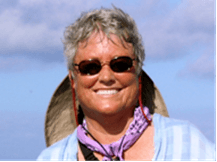 There's some people you meet during the course of your career that you never want to lose track of. Such a person is Robin Orr.

I first met Robin in 1988 when she spoke at the first National Symposium on Health Care Interior Design in Carlsbad, CA. At that time, she was the administrator of the "Program Planetree" Model Hospital Unit and Planetree Resource Center sponsored and managed by the Pacific Presbyterian Medical Center in San Francisco.

Like everyone else in the room at that first Symposium, I was mesmerized by Robin's story of Planetree founder Angie Thieriot and the goals of Program Planetree. This was the beginning of patient-centered care.

Robin went on to lead Planetree as its Executive Director and guided it through a period of early expansion until she left in 1992. As one of the founding board members of The Center for Health Design (where I came to know her better), Robin's thoughtful, focused, counsel was always spot-on.

After leaving Planetree, Robin continued to consult with healthcare organizations and speak at national conferences. She was widely recognized and at the top of her game.  Then, she had a health crisis of her own.

"I had two bouts with cancer and it changed my perspective of how I wanted to spend my time," Robin told me recently. "All the business travel was wearing on me."  She pauses, and laughs. "I was tired of hearing myself talk."

So, when the opportunity to buy a travel agency presented itself in 2007, Robin and partner Sue Cook (who worked for Macy's, Apple, and with Tom Peters and Marriott's Roger Dow), decided to reinvent themselves and become travel consultants.

"I'd always done international travel and wanted to explore the world," Robin says, adding that a travel company allows her to do this in person or as a voyeur through her clients."Being in the joy business is much more fun than getting on a plane, going to a meeting, and trying to convince people to be nice."

A Toe in the Healthcare World

Robin still does a little bit of healthcare consulting -- serving as a strategic advisor to John Zeisel at Hearthstone Alzheimer Care in Woburn, MA. It keeps her with one toe in the healthcare world that she has been passionate about for the past 30+ years.

And, even though she has never been involved in senior care or dementia before, Robin thinks her talents are well-suited to Hearthstone's desire to expand its reach throughout the world. "It's really valuable work," she says, "because there's so much more that society can do to open its doors and embrace people with dementia."

Robin doesn't have a connection to Planetree anymore, but has kept an eye on how the organization has evolved. "I have a hard time seeing it as an organization," she confesses, explaining that she worries about when things that start out as ideas become organizations. "Where are the new ideas?" she asks.

Indeed.  A topic for another day. But, let's get back to the travel business.

Although the company is called Travel Cruise Connections, Robin and Sue don't just specialize in cruises. They can book any kind of travel, but mostly work with people who are interested in more complex trips.  Those who want to understand where they are going and what they are doing.

That's one reason to work with a travel agent.  Another, says Robin, is that "We're your advocate. We'll get you the best deals. And we don't charge you money."

Top three places Robin has visited?  She lists Galapagos Islands, Turkey, and a recent large sailboat cruise she took to the West Indies. "Cruises are a great way to go to multiple destinations," she says. "They are a great value.  You don't have to unpack. Meals, activities, and entertainment are provided. Plus, ships come in all sizes and shapes."

Advice for those who want to see the world? "Do it. Don't wait," she says. "Our motto is 'carpe diem' - seize the day. Because if you wait to travel, you never will."

Robin is one of the most amazing women I have ever met. She is completely authentic and truly compassionate. Thanks Sara for writing such a lovely piece about her!!!

I agree, Phyllis! Those traits make her (and Sue) great travel agents, too. Have booked two trips through them and am working on a third...

I LOVE Robin. I met her in L.A. during a panel on healthcare design. I was moderating and she was a panelist. Every word she speaks is a pearl of wisdom. Thank you, Sara, for profiling her!

Sara, You really captured the heart and soul of Robin....compassion, wisdom, and truth-teller. Having worked together for over thirty years, I feel like the luckiest person on earth. Whether in a healthcare setting or in the travel industry, she inspires others to be courageous, take risks, go to places they've never before. And have fun. Speaking of fun, please feel free to give Robin or me a call so we can add your name to happy travellers. 805-962-9898

Thanks, Sue. I'm one of those happy travelers!

Robin Orr is one of the most remarkable people I have had the honor to meet and work with over the last 25 years in healthcare. Robin is a friend, true leader and inspiration to many more than she will ever know. The original idea, need and opportunity to transform health and care from the patient’s perspective is as relevant and important as it has have ever been. Angie’s dream and those like Robin, who provided both the catalyst and passion for making a difference have helped to create a movement that is still taking shape and changing way people experience healthcare around the world. Today, Planetree is working in over 500 locations, with thousands of caregivers in 16 countries, growing and making a difference. Thank you for sharing Sara and highlighting one of the true visionaries in our field. Continued success and happiness to Sue and Robin in their world travels!

Thank you for reminding us of the breadth and depth of the contribution that Robin has made to healthcare. And the best thing about her, in my opinion, is that she is a fun and spirit-filled woman who is so generous in all that she is and does. I am grateful that our paths crossed so many years ago and that we stay connected.

Thanks, Kevin, for reminding us about Robin's great sense of humor.