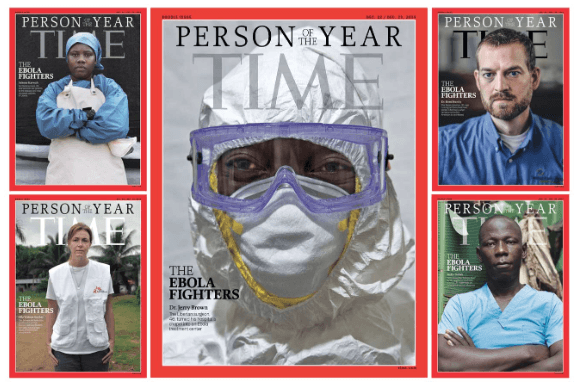 Media interest in Ebola has waned -- replaced by reports about Cyber Monday sales records, athletes wearing "I Can't Breathe" t-shirts, and CIA torture tactics. But kudos to Time Magazine for naming Ebola fighters in West Africa Person of the Year.

And while the fear has subsided in this country, I'll bet that preparing facilities for Ebola patients is still a top-of-mind issue for healthcare organizations, where the risk is far greater to healthcare workers than to patients or the general population.

In October, I did some research and talked to some experts on designing for Ebola for an article on infection control for Healthcare Design's December issue.  But then, the editor asked me to only focus on designing to prevent hospital-acquired infections because they had other contributors who were writing about Ebola.

So, I thought I'd share a little bit about what I learned about designing for Ebola.

According to the Centers for Disease Control (CDC), Ebola is not an airborne virus. It is transmitted through direct contact with blood or body fluids/substances of an infected person with symptoms or through exposure to objects that have been contaminated.

The role of the environment in transmission, though, has not been established. Laboratory design expert Jon Crane at HDR told me that Ebola has been demonstrated as being airborne in laboratory settings.

Airborne infections, Crane explained, are caused by droplets that can float in the air – especially in humid conditions -- for a long time. And while hospitals that have well-functioning mechanical systems aren’t likely to have issues with humidity in isolation or bio-containment units, having a ventilation system that allows air to flow in the room, but not escape from the room – is critical.

And what about the personal protective equipment (PPE) that staff is required to put on and take off every time they enter the room of an Ebola patient? There has to be adequate space to store the PPE, ample room to put it on and take it off, and a place to dispose the estimated 40 bags of PPE waste a day.

Linda Herrig at Newcomb & Boyd Consulting Engineering Group told me that the original autoclave at Emory University Hospital in Atlanta, GA (site of another one of the four bio-containment units in the U.S.) was too small to manage Ebola patient waste. Her firm, along with HKS Architects designed the unit -- which, like the others, was built in response to the threat of bio-terrorism.

And, none of the four bio-containment units in the U.S. were designed to meet Biosafety Level 4 (BSL-4) criteria. This is the criteria required for laboratory work with dangerous and exotic agents that pose a high individual risk of infections and life-threatening disease -- which are frequently fatal.

According to Crane, only the laboratories at the CDC offer that amount of protection to workers.

He also said that renovating a Level 3 bio-containment unit in a hospital to meet Level 4 criteria would be nearly impossible, because of the increased need for required dressing and decontamination functions and required mechanical and engineering systems for air filtration, chemical systems, air handling and exhaust, etc. Crane just recommends starting from scratch and designing it as a BSL-4 from the beginning.

But, U.S. hospitals with bio-containment units have successfully treated Ebola patients in the past few months. And the CDC is doing everything it can to help prepare other hospitals to deal with infected patients --  identifying 36 hospitals in the U.S. as Ebola Treatment Centers.

Ebola and other threats to the safety of healthcare workers and patients are not going away. For now, at least, it seems we have it under control.

Be sure to check out Healthcare Design's December issue for more on designing for Ebola.

Listening to "Talk Radio" in NYC this AM ...one of the callers suggested it should be the NYC Transit Workers...I am not sure why? Part of our society mosaic ...we all have an opinion.

Ebola hasn't gone away ...while it's out of sight it shouldn't be out of mind.

And, unfortunately, neither has bio-terrorism. We need to be prepared.