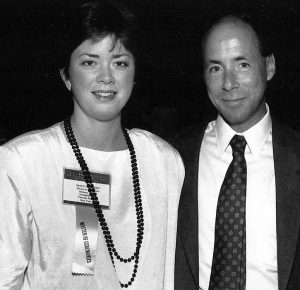 Wayne and I at the First Annual Health Care Interior Design Symposium.

I first met Wayne Ruga almost 30 years ago at a reception at the Western Merchandise Mart in San Francisco.

I was an associate editor at Contract magazine.  He was a healthcare architect who told me he was going to start a healthcare design symposium.

"Send me some information on it," I said, which is the standard response of most editors to people they don't know who want them to write about something.

Not only did Wayne send me information, but he also invited me to be on the Advisory Council for the Symposium on Healthcare Interior Design and be the emcee for the first symposium, which was held in 1988 at the La Costa Resort and Spa in Carlsbad, CA.

Birth of the Healthcare Design Industry

With the launch of the Symposium, Wayne helped establish the healthcare design industry by bringing together healthcare designers, product manufacturers, and healthcare professionals. For many, it was an "ah ha" moment. They'd found people who shared their passion.

Along with a group of healthcare design thought leaders who served on the Symposium's Advisory Board, Wayne founded the nonprofit Center for Health Design in 1993. I was one of the founding board members of The Center.

The Symposium continued to grow as an event and was sold to Imark Communications so The Center's small staff could spend more time on its advocacy efforts instead of on producing a conference. The organization's focus turned to research about how the design of the physical environment can impact outcomes.

Wayne's decision to pursue a Ph.D. was the main catalyst for his departure from The Center in early 1999. He moved to Manchester, England, and began his studies.

I caught up with Wayne last month at NeoCon in Chicago. While earning his Ph.D. from Manchester Metropolitan University, Wayne started the Caritas Project, which "seeks to transform the future of health and healthcare delivery through the development of strategies and technologies that produce generative environments."

He also met and married a woman from Manchester, which is why he's still living there.

Over the past 15 years or so, Wayne has been working with a select few individuals and companies to guide and mentor them on the principles of Generative Space. He's also produced several leadership events in connection with this work and is still involved in the Healthcare Facilities Symposium -- the descendant of his original Symposium.

Although what he started 30 years ago has indeed changed the healthcare design world, Wayne is not done yet. He believes the best way to do that is to create unique learning experiences that bring people together.

It will be interesting to see what he comes up with next.

Check out these articles and resources:

THANK YOU, Sara -
I am grateful for
your kind
words -
Truly,

Wonderful article, Sara! Thanks for writing and sharing.

I always enjoy your trips down memory lane. Funny how things turn out. One of the golf courses at the La Costa (now, the Omni) Resort & Spa is my "backyard".