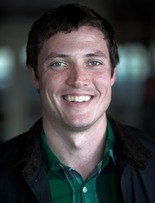 MASS Design Group's Michael Murphy accepted The Center for Health Design's Changmaker Award for his firm yesterday at the Healthcare Design conference in Orlando.  His moving story of how he got into social impact design has been a highlight of the conference for me so far.

It wasn't the first time Murphy's firm had been honored at a big event. Contract magazine named MASS "Designer of the Year" in 2012 at fetted him at a grand breakfast at Cipriani in New York City.  But I was surprised at the number of people at the Healthcare Design conference who'd never heard of him.

In accepting the Changemaker Award, Murphy spoke about how he discovered the power of the environment to heal that inspired him to be an architect when helping his father battle cancer. And how he subsequently met Dr. Paul Farmer, a field doctor in South Africa, who got him involved in a hospital project in Rawanda.

During a Q&A with CHD Board Chair Roz Cama, I was glad to hear Murphy acknowledge that many of us in the audience have known -- and have been promoting -- the power of the environment to heal for a long time. And I've never really heard anyone before talk about that how a building is constructed can also be healing.

The people laying the bricks and mortar in Murphy's projects often find the building process therapeutic. This is a notion that's often lost in the large hospital projects we construct in the U.S. But I'm sure there are many stories.  How can we begin to tell them?

The other interesting idea Murphy spoke about is designing buildings to fail, but fail safely.  "We should be expecting disaster, he told us.  "This is where we should be thinking."

Dear Sara,
It was good reason to fly all the way from Israel to the HCD, just to hear Michael Murphy's amazing story.
Thanks!
Rami.

[…] a compelling story of how he got started designing healthcare facilities in third world countries. More on his talk. (Silver goes to Michael Graves’ acceptance speech for his Legacy Award from […]