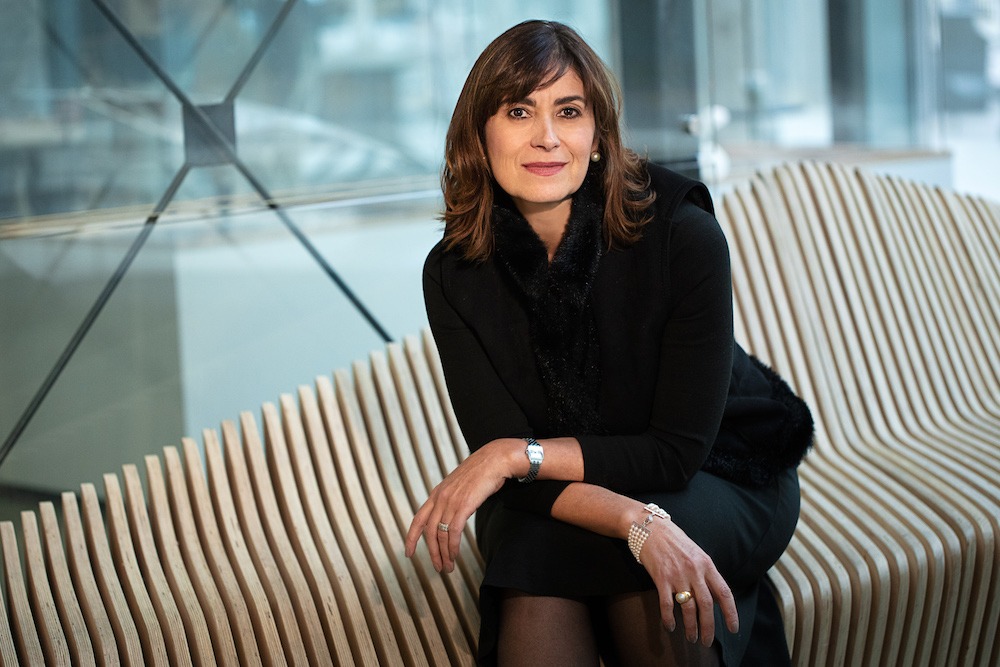 I think I've been around long enough to recognize extraordinary healthcare interior design talent when I see it. And ever since I've been aware of her work, Ana Pinto-Alexander has been one of those people.

Currently the Director of Health Interiors for HKS in Dallas, Tex., Ana and I have known each other since the early 2000s. I'm not exactly sure where she and I first met, but I think it was at a Center for Health Design Pebble Project meeting in Indianapolis, Ind. in 2006.

Back then, she was Ana Maregatti, founder and owner of Maregatti Interiors in Indianapolis, Ind., which she had spun off of BSA Lifestructures in 2001 after working for the firm for about 10 years. One of her projects, Clarian Medical Center North (now IU Health North) in Carmel, Ind., was a tour site for the Pebble meeting.

A collaboration with HKS, IU Health North's building and interiors have a human scale to them. There's also plenty of access to nature and natural light.

But as I remember, it was the attention to design details and selection of materials and finishes by Ana and her team that made it different than many of the newly constructed hospitals I was seeing at the time.

It had a hospitality feel to it, but still felt like a hospital.

In the years since that Pebble meeting, our paths have crossed at various conferences and events and I have interviewed Ana for articles I've written on healthcare design.

Recently, I caught up with Ana by phone. We spoke about her backstory.

Born in Columbia, South America, Ana came to the U.S. to attend Purdue University in West Lafayette, Ind. After graduating in 1986 with an interior design degree, she worked for Schmidt Associates Architects in Indianapolis for a few years doing K-12 and higher education projects before joining BSA.

"When I did my first healthcare project at BSA, my career went from being successful to being significant," she says.

Ana also experienced healthcare firsthand when her second child was born with a cyst in her right lung and had to have surgery 10 days after she was born. All turned out well, but her time in Riley Hospital for Children as a parent of a sick child made her realize the importance of designing with empathy. (For more on this, listen to the Healthcare Design 2.0 podcast interview with Ana.)

When Maregetti Interiors was acquired by HKS in 2011, Ana relocated to Dallas to head up the firm's healthcare interior design practice. She misses the Midwest, but is happy in Dallas. "The Midwest is beautiful," she says. "But Dallas is a wonderful city."

Working for a global firm like HKS has allowed Ana to expand her design influence. But she sees communication as one of the challenges of working for a firm with 1,400 employees and 27 offices.

"There's so much knowledge internally at HKS," she says. "The challenge is how to get that knowledge to the greater HKS community. People are not necessarily seeking it."

This is not unique to HKS. Many large firms struggle with the same thing.

"Is is a lack of curiosity or are people just overwhelmed?" Ana asks. She's not sure, but is convinced that to create new "delighters" into the work, designers have to be curious and constantly learning.

The coolest thing Ana is working on now is a retail health clinic where she's teaming up with hospitality and retail interior designers. She couldn't give any specifics, but feels that it is a new concept being driven by "brilliant" owners.

Ana says that the most rewarding thing she's ever done was to start Maregatti Interiors with seven people and grow it to 22. "To see people who worked there to be successful gives me an incredible sense of satisfaction," she states, adding that mentoring young designers is very important to her.

Here are four pieces of advice Ana has for young design professionals:

"Interior designers come out of school with zero knowledge of business," she claims. "It's not taught in schools."

When she's not working, Ana likes to do jigsaw puzzles, take walks with her two dogs (a Beagle and a German Shorthair puppy), cook for and entertain friends in her home, and garden. "My husband loves to garden," she says. "So I've learned to like it. But he's afraid when he sees the trimmer in my hands."

Like me, Ana loves what she does, but does not see herself working until she's 80. (And yes, we both have a ways to go before we turn 80.)

"There's other younger people coming along," she says.  "I'm training them to do my job."

Ana and her husband have purchased 80 acres of land in Kentucky, where she hopes to move in the next 10 years. She wants to have more animals and maybe work part-time as a designer or consultant.

And she plans to keep on learning new things.

HKS is so fortunate to have someone like Ana on our staff. She’s an amazing individual and well respected in the industry.