Ventilation in Healthcare Facilities: Can We Do Better?

Home / Healthcare design / Ventilation in Healthcare Facilities: Can We Do Better?
05/28/2021 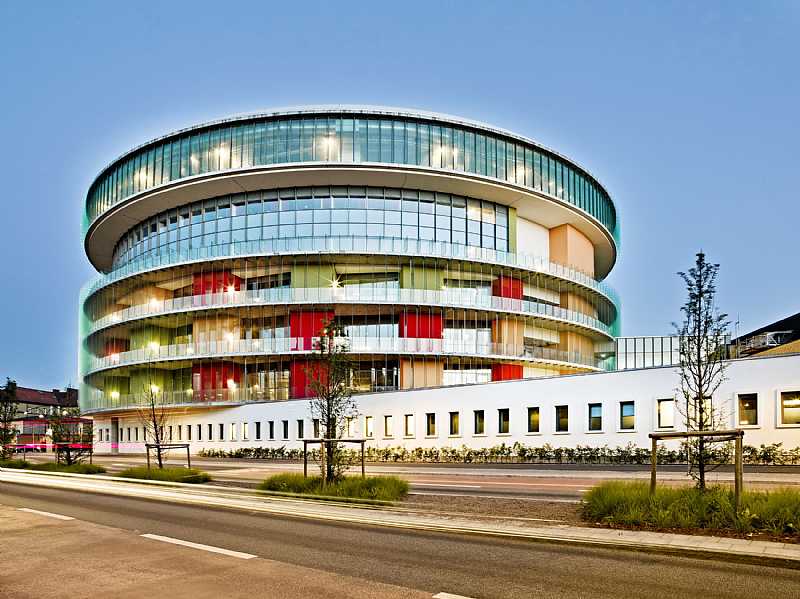 Should ventilation in healthcare facilities go back to the old ways?

Back to the open ward days of Florence Nightingale where windows opened and bad air was sucked out through chimneys? Or to the 1920s during the flu pandemic when infected patients in some hospitals were taken outside?

Probably not. But these days, the idea of being able to go outside or open windows seems like a simple solution to help prevent the spread of infection.

There are many other countries where healthcare facilities are designed to be more open to the outside elements. The Butero District Hospital in Rwanda designed by MASS Design Group and the Bayalpata Regional Hospital in Nepal designed by Sharon Davis Design come to mind.

Both utilize layout and natural cross-ventilation to reduce the spread of germs. Bayalpata also has an outdoor courtyard that functions as a waiting area.

Another example is the circular-shaped Emergency and Infectious Diseases Clinic at Skane University Hospital in Malmo, Sweden (above), designed by C.F. Moller Architects. It has outside entrances into patient rooms through a balcony instead of a central hallway.

The clinic's isolation ward is designed so that patients and staff enter through an airlock from a walkway that surrounds the entire building. And there's an open central atrium.

In a quick Internet search, I couldn't find any follow up research or data on whether the clinic's building design helped prevent the spread of infection, so I don't know if it really works. And I haven't seen it replicated here in the states.

Perhaps all those balconies and windows are cost-prohibitive for U.S. healthcare providers. Or against code. It's also likely that the idea of walking outside in cold weather to get to their room might not work for a lot of America's patient population.

But all these designs make sense, don't they?  And of course, they wouldn't work in every climate or in every city.

Designing to Allow for Healthy Outside Air

Because not all outside air is healthy, as former healthcare facilities executive Von Lambert (now the Principal/Owner, Elevation Healthcare Advisory Group) pointed out to me in a recent email exchange. Von wrote, "We need to determine how a facility can be designed to allow for outside air, when in fact it is the healthier alternative, but still be able to protect the occupants when it is not."

Von also reminded me that ASHRAE standards for U.S. hospital air handling systems do allow outside air to be brought in -- with the added benefit of filtration.

Right now, I'm thinking of that famous quote from the TV show, "The Six-Million Dollar Man." After test pilot Colonel Steve Austin is gravely wounded, the scientists say, "We can rebuild him. We have the technology."

Don't we have the technology to do the stuff that Von is suggesting?

Another argument for operable windows in healthcare facilities is resiliency. Remember those residents who died in Florida nursing homes after Hurricane Irma because the electricity went out and without generators or operable windows, there was no way to get any kind of air circulation going?

You could argue that a generator would solve this problem, but what if the generator fails?

Von wouldn't let me off that easy.

He said the opposing view is that if a facility has no power then it should be evacuated.  That the case I mentioned is an outlier.

But outlier or not, Von acknowledges that it is a potential threat that could have very high consequences. "I believe there is common ground that can allow for operable windows, even if they are only utilized for emergency conditions," he wrote.

Von also believes there is a disconnect between the systems that control the air temperature, humidity, and pressure in healthcare facilities and the clinical systems that manage the patients' needs. For example, if a patient repeatedly calls for the temperature to be decreased, is it because the system is malfunctioning or is the patient having a bad reaction to a recently delivered medication?

"There are sensors, systems, and devices that can be designed into facilities that will allow for the best of both worlds to co-exist," wrote Von, adding that they can also reduce energy costs, healthcare acquired infections, surgical site infections, and other outcomes.

And while there is a proven ROI for these systems, they are seldom used in healthcare facilities.

Again, if we have the technology, so why aren't we using it? Is it because, as Von suggests, those making the decisions about ventilation systems are falling into the "we've always done it this way" trap?

I'd love to hear your thoughts on this, and if you're using any innovative ventilation strategies in your projects/facilities. Contact me or leave a comment in the box below.

It is unconscionable to design and build buildings for human habitation that have inoperable windows - this is as true for hospitals and healthcare facilities as it is for schools, factories, hotels, and even restaurants. This is not to say that mechanical systems shouldn't be used to supplement the ability to access direct outside air - they should - but, relying exclusively on mechanical systems to keep occupants safe and healthy is not a reliable proposition (as we learned from the nursing homes in Florida that had inoperable windows, and their mechanical system lost its power - causing deaths of residents).

It is my understanding that natural ventilation is one of the key aspects of providing a healing environment - and that we should always aim to provide it, as far as is reasonably possible.