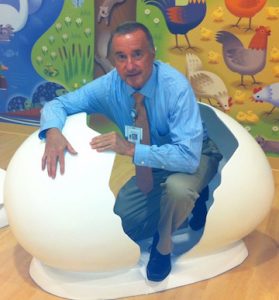 I can't remember when I first met Bruce Komiske, but it was probably at the Symposium on Healthcare Design in 1996 when he participated in a panel discussion about designing a children's hospital.

A hospital administrator by training, Bruce had recently finished helping to plan, build, and engage the community to create the award-winning Hasbro Children's Hospital in Providence, R.I. Among other things, he shared with us three guiding principles that his team had learned from the project:

Now even though that was almost 20 years ago, as I read them again in the Journal of Healthcare Design, Volume 9, I think those principles still ring true today.

Bruce pioneered the concept of bringing the community into the children's hospital by using real objects as part of the design. At Hasbro it was a boat from a local marina, a fire truck at Fareri, and whales from the Museum of Natural History at Lurie. And lots of other stuff to engage both children and adults while visiting the hospital.

After Lurie opened in 2012, Bruce joined Fareri Associates to help plan and build a medical village on the Westchester Medical Center campus, including the first of its' kind, a Living Science Center. A museum where kids can learn about being healthy.

But the project was moving too slow for him, and being a journeyman children's hospital guy, Bruce moved on again. "Building children's hospitals is what I do," he told me when I ran into him at the Healthcare Facilities Symposium in Chicago recently.

Now Bruce is Vice President, New Hospital Design & Construction for the new $35 million Children's Hospital at Erlanger in Chattanooga, TN. And he's working with HKS Inc. Atlanta and McCarthy Building Companies to plan, design, and build it. I can't wait to see his latest creation -- although it's going to probably at least five years before it breaks ground.

In his spare time (what spare time?), Bruce likes to sail and still serves as a docent for the Chicago Architecture Foundation, giving architectural tours of the city when he's in town.

Who wouldn't? Check out his books on Amazon.

Thank you for such a nice commentary. It has been great following your influence on creating a healing environment and know that it is still going strong.
Your good friend,
Bruce

So wonderful to be caught up on Bruce's creative mind and effective contribution to the design of Children's hospitals. Just reading your blog made me smile remembering the first time I saw the power of whimsy, creative play and positive distration come alive in a Children's hospital. In addition, thank you for doing the hard work to convince others to donate to such wonderfully inventive places for children to heal. Keep on trucking dear Bruce...

Thanks so much Bruce for your commitment to one of our most important and vulnerable " user groups " in healthcare - our children !!

I heard Bruce speak a few years ago at a conference in Scotland and thought he and the work he was doing were inspirational. So glad to hear that he is still doing great works for the sick children of America and their families. Brilliant.