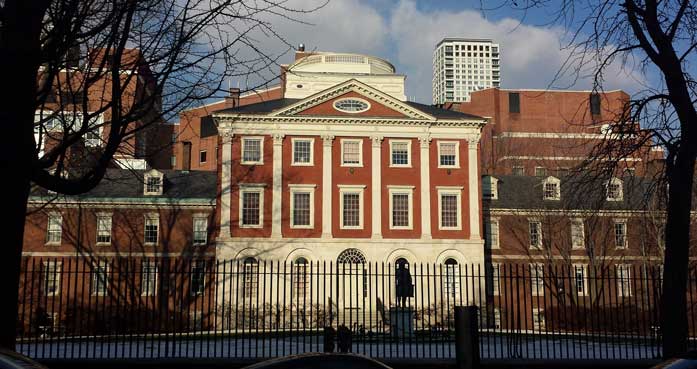 But the other day as I was looking for something in my files, I came across a 1992 article I'd saved from Modern Healthcare on the first hospital in the U.S. -- Pennsylvania Hospital in Philadelphia.

It made me think about the fact that we should always look to the past in order to design for the next healthcare.  After all, good ideas are always good ideas.

Pennsylvania Hospital still exists as part of PennMedicine. Founded in 1751 by Dr. Thomas Bond and Benjamin Franklin, it was housed in a temporary location on High (now Market) Street while work began on a hospital building.

Here's 7 other interesting facts about the original hospital building and lessons to be learned:

1. The Pine Building (now open to the public for tours) was designed by architect Samuel Rhoades, who later became a member of the hospital’s Board of Managers. It is still considered to be one of the finest examples of Colonial and Federal architecture in Philadelphia. Lesson:  Good design is timeless.

3. A photo on the website shows an open ward with sunlight streaming in from windows.  The hospital also has several gardens – one called a Physic Garden, which was originally intended to provide physicians with ingredients for medicines. The Pine Street garden has azalea bushes and wisteria vines that are estimated to be over 100 years old. Lesson:  Access to natural light and nature are important to healing and recovery.

4. The room that housed the Apothecary Shop still exists, and is now used as a conference room. Lesson: Spaces should be designed so they can be repurposed someday.

5. Painting of “Christ Healing the Sick in the Temple” by Benjamin West was completed in 1815 and delivered to the hospital in 1817. 30,000 visitors came to see it in the first 12 months. Lesson:  A hospital doesn't just have to be designed to treat sick people.

6. The Pine Building is home of the nation’s oldest surgical Amphitheater, known as the “dreaded circular room.” Since there was no electricity, surgeries were performed on sunny days between 11 a.m. and 2 p.m. with candles providing extra illumination. Seating around the room was for medical students to observe and learn, as well as for paying spectators to be entertained. Lesson:  Design can facilitate interaction. It can also produce both good and bad emotions.

7. Concerned about fire prevention because of the use of candles for light and fireplaces for heating, the Board of Managers purchased the hospital's first hand pumper fire engine in 1780. Lesson:  Designing for safety is always a challenge.

One last interesting tidbit:  A dry moat surrounding the hospital was used to exercise the mentally ill. Put that image in your mind.

This fills me with sadness. For me the lesson is still: keep the visitors out! We already knew about germs.

And "disturbing cries of the insane" probably included the women and girls who could be sent to asylums for disobeying husbands and fathers.

Then I picture myself in that horrible moat being "exercised" This is not a fun fact.

Hi Margaret -- Interesting comments! I disagree with you on keeping visitors out, though. I think its good that hospitals can serve the community in other ways. Access to gardens or public places where art is displayed can benefit all.

I had worked at a VA hospital where several (closed) buildings were part of the national historical register. One building had a 'surgical suite' that was full of sky-light windows to amplify light required for surgery. This bit of information doesn't exactly contribute to the theme in your article, and I've always considered it to be thought-provoking. (At least the skylights allowed surgical staff the opportunity to look outside at natural lighting.)

Love the OR skylight idea, Marijean. Nobody builds them like that anymore!

I did some projects at Pennsylvania Hospital a long time ago. If I remember correctly there are also cast iron columns in the building that have slots at the bottom to support ventilation up through the roof structure. I was impressed by this early example of low wall ventilation.

That's a great story, Hugh! Thanks for sharing.

A 260 year old facility is worthy of our admiration for the forward thinking approach to lighting, how they solved for the spectrum of patients and honored empathy. It seems to be a very humane environment for it's age. Thoughtful design is timeless and leads us to try harder.
Great sharing Sara, thank you.

[…] differences, and yet so many similarities. Just like the 259-year-old hospital in Philadelphia I wrote about in […]

[…] I often write about healthcare design trends and new hospital facilities. But the other day as I was looking for something in my files, I came across a 1992 article I’d saved from Modern Healthcare on the first hospital in the U.S. — Pennsylvania Hospital in Philadelphia. It made me think about the fact that we should always look to the past in order to design for the next healthcare…Read more. […]